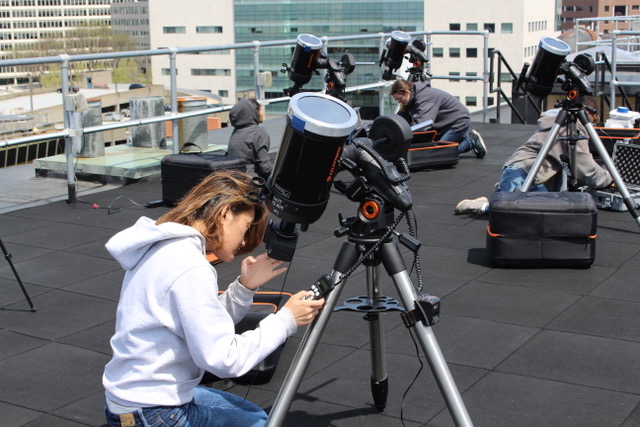 The viewing session at MIT is open to the MIT community and to the public.  Sponsored by the Department of Earth, Atmospheric, and Planetary Sciences at MIT, it will be held on the Kresge Oval, outside the MIT Student Center at 77 Mass. Ave.  (http://whereis.mit.edu/?go=G8)
Date:  21 August 2017

Note:  the eclipse will be partial as seen from the Boston area, and will be ongoing during this entire time.  There is no one time when the eclipse will be “best”, so feel free to drop by anytime during 1:30 to 3:30pm.  The eclipse will progress somewhat slowly, so you probably won’t want to stay for the whole time. We will have eclipse glasses to use at the event, plus specially filtered telescopes to give you close-up views of the sun.

Eclipse Glasses
If you haven’t yet gotten special eclipse glasses for the event, here are some options.
First, check out this list of safety requirements put out by NASA to identify safe eclipse glasses: https://www.nasa.gov/press-release/nasa-recommends-safety-tips-to-view-the-august-solar-eclipse
The American Astronomical Society has a list of vendors that sell approved eclipse glasses. https://eclipse.aas.org/resources/solar-filters
If you’re ordering online, I suggest doing so this week so you’ll be sure to get them in time for the event.Contact Amanda Bosh (x3-4115 | asbosh@mit.edu) to be placed on the email list for notifications.

NASA Television is offering a special live program, “Eclipse Across America: Through the Eyes of NASA” with real-time coverage of the event from coast to coast. The nearly four-hour program will include unprecedented images of the Aug. 21 eclipse from numerous spacecraft — including the International Space Station – high-altitude aircraft and balloons, and ground observations. Each will offer a unique vantage point for the eclipse. Additionally, the broadcast will include live coverage of activities in parks, libraries, stadiums, festivals and museums across the nation, and on social media. To watch the Aug. 21 NASA TV eclipse broadcast online and access interactive web content and views of the eclipse from these assets, visit: https://www.nasa.gov/eclipselive